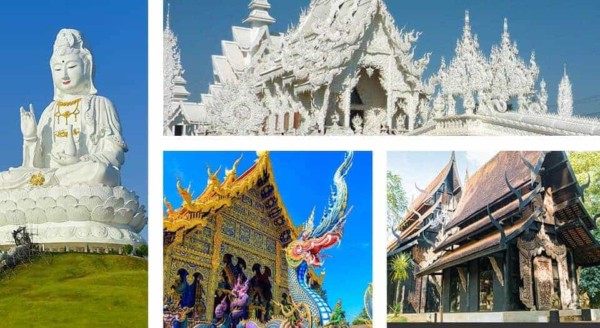 Chiang Rai is a colorful city indeed, not least for its collection of gorgeous temples painted in brilliant hues. Spend the day exploring the “Three Colors of Chiang Rai”: The White Temple, the Black House, and the Blue Temple, with the optional addition of Wat Huay Pla Kang, the Chinese-Lanna fusion temple.

Though all these landmarks can be visited independently, a private tour provides a rare opportunity to hear the histories of the temples, the culture and context surrounding their construction, and the stories of the controversial artists and forward-thinking visionaries who created them.

Please Note : Your guide will make sure that you spend as much time as possible at each activity. However, the schedule may vary depending on the weather and traffic.

It’s a few hours drive from Chiang Mai — where we’ll pick you up at your hotel — to Chiang Rai, through countryside and winding mountain roads. We’ll stop along the way at a natural hot spring. Take a rest, stretch your legs, and relax with a cup of coffee. Recharge in nature before exploring some of the greatest human constructions in Northern Thailand! After about twenty minutes here, we’ll move on to the highlights of the tour.

The perfect first stop for any tour of Thailand’s most extraordinary religious structures. To describe it as “eye-catching” is an understatement – this magnificent temple is painted top-to-bottom in pristine white, rather than typical gold. The entire outer facade is covered with detailed adornments and glitters with mirrors and glass that sparkle in the sun.

Designed by a famous Thai visual artist named Chalermchai Kositpipat, nearly every aspect of the White Temple is symbolic in some way. The art, architecture, sculptures, and paintings all reflect on the path from greed, desire, and destruction towards enlightenment through the Buddha’s teachings. Walk past an unsettling pit of outstretched hands into a room filled with enormous murals featuring pop culture icons and cartoon characters. Exit the fantastical building to admire a peaceful garden and watch the sky reflect into a koi fish pond. If you need to use the restroom, this is the best time to do so, as the White Temple is home to “the most beautiful bathrooms in the world”, completely covered in gold.

The Black House, or Baan Dam

The Black House is the next stop on the temple tour. Though it was also built by a famous artist – Thawan Duchanee – the Black House is the visual opposite of the White Temple. Built of solid slabs of dark wood painted black and deep brown, the Black House is a set of dozens of buildings, much like a museum, showcasing paintings, sculptures, carvings, installations, and furniture created and collected by Thawan Duchanee. These pieces are made almost entirely out of animal bones, skins, or horns, all representing Buddhist teachings and philosophy or illustrating the suffering the Buddha witnessed in the world.

At face value, the Black House may seem to be the complete opposite of the White Temple, but the two structures also have a lot in common. Both landmarks use extremely unique, controversial, and even shocking visual mediums to teach Buddhist philosophy, warn against the dangers of evil and desire, and encourage visitors towards enlightenment. And of course, the Black House also comes with its own set of bizarre bathrooms, complete with animal skins and buffalo horns.

Rest up at a local restaurant to dig into some fresh and delicious Thai food.

After lunch, we’ll head straight for the Blue Temple, or Wat Rong Suea Ten in Thai. This striking temple is made entirely of a vibrant royal blue and covered in gleaming gold. The combination of the two colors is gorgeous and completely unique. Look out for hints that this temple was built by a student of Chalermchai Kositpipat – much of the decorative art covering the Blue Temple is done in a similar style. As the temple was built very recently in 2016, the art and architecture has a more modern feel than other temples in the region. The inside and outside of the Blue Temple are equally impressive, covered in detailed sculptures of nagas and garudas, all in blue and gold.

The contemporary elements of the Blue Temple stand out against its history. The structure was built on top of an ancient temple, abandoned a century prior to the Blue Temple’s construction. After the temple was abandoned, wild tigers are said to have roamed through the area, earning the Blue Temple its Thai name, which actually means “Tiger Temple”.

The final stop on this tour is optional, but highly encouraged. Wat Huay Pla Kang is a fourth temple in Chiang Rai, just as unique and interesting as its colorful counterparts, though still relatively undiscovered by tourists. Like the Black House and the White and Blue Temples, Wat Huay Pla Kang was also built by a visionary, a monk named Phra Ajarn Phob Chok.

Unlike other Chiang Rai temples, which are usually built in the Lanna style or a fusion of Lanna and Thai traditional elements, Wat Huay Pla Kang is a fusion of Lanna and Chinese architectural styles. Built on a mountain, the temple itself is enormous, featuring a 9-storied chedi that towers over the valley below. The chedi is built in a pyramid shape, which is found in neither China nor Thailand, but the very tip looks much like a classic bell-shaped Thai chedi. Walk past the staircase into the temple and notice its guardians, which are Chinese dragons instead of naga serpents.

Inside the temple are statues carved of sandalwood, including a massive two-story statue of Guan Yin, the largest in the entire country. Look out for Chinese deities intermixed with Thai-style Buddhas, all arranged around the large center room underneath the enormous chedi.

Wat Huay Pla Kang is impressive on its own, but the real draw of this temple is the Guan Yin monument nearby. This gigantic monument is 23 stories high, and for a small fee visitors can take an elevator to the very top to look out over the countryside. Walk around the top floor to admire artwork representing mythological creatures and scenes from Buddhist cosmology. Peek out of different windows for different viewpoints of villages, farms, and far away mountains.

After having spent the day experiencing such a wide variety of unique temples, you’ll have a completely different perspective of the culture and structures in the region.

Need Help?
Contact us
License No. 24/00144
issued by the Department of Tourism
© 2023 Bon Voyage Thailand. All Rights Reserved.